skip to main | skip to sidebar

First my stitching news. Of course I forgot to get pictures of the finished products before packaging and mailing; but, I stitched 3 little house/winter scenes and made into flat-folds and one reindeer ornament.

I've also been stitching on my RR Verdure piece from last year. It's such a gorgeous piece.
We've been so busy since my last update. You ever have those times in your life when everything runs on fast-forward? You skip along and everythings calm and clean, then before you know it things are helter-skelter? Nothing tragic or can't be fixed, but everything that could disrupt my routine was saved up this year and all hit the same week.
My car had costly repairs (but GM was wonderful and reimbursed me out of warranty for every penny) my big screen TV went out (needed a lamp projection bulb - those are consumer replaceables now) ceiling fan in our office blew up (that was interesting) our daughter's car was hit in the parking lot at college (with her sitting in it - we left Orlando, FL and flew home 3 days early to see about her). Everything's good now and everything's fixed but maybe next time it could be spaced out and not hit all in the same week.
Oh -then we had rescheduled our Gulf Shores getaway cause Hurricane Ike brought in a pounding surf that deposited snowdrift like mounds of sand (truly looks like snow) so that the neighborhood where we rented a house was literally closed to traffic and evacuated. Well, we rescheduled for the end of Oct. and had a really good vacation - except our daughter called on our second night to tell us (before we saw it on CNN) that there had been a shooting in the parking lot at her dorm and 2 people were killed. While we were horrified for the families who lost their child - we were worried about the safety of our daughter. I think it was a blessing that we were away as we couldn't drive the normal 2 hours to be with her and make sure things were okay. The police stayed in the hallway of her dorm all night and the next day until they had a handle on why the shooting occurred and had made arrest. I feel so guilty for worrying about my daughter when two other families lost their innocent sons. They were just in the wrong place at the wrong time. So tragic.
On a brighter note.......here's a picture of Don and I in Gulf

Shores. The sun was so bright and most of the time the wind wasn't too bad. And the water - it was warm enough to walk in and so clear it sparkled.
We had the beach to ourselves and took long walks. On one of those walks we were lucky to be walking right at the shore line and the sun was behind us and with the crystal clear water, I looked out about 5 feet from shore and saw a group of sting-rays. Not real big ones (they were maybe 18 inches with their wings extended?) It's a good guess as the next day we saw one of them dead on the beach so I had to check. LOL Anyway, there were maybe 10-12 of them in the group and they were absolutely beautiful. So graceful like they floated through the water with their winglets furling and unfurling as they went. They didn't go fast, watching them was like in slow motion.
I got up each morning to see the sunrise. What gorgeous colors - as everyone knows, my favorite palette. Check out in the dark part of the picture - that's the sand mounds left from Hurricane Ike. They are still scooping it up and dump trucks full make the circle down to the beach to dump it. They were very nice and made all their noise working in other areas so we had mostly peace and quiet during out stay.
And a little later at sunrise..... You can see the oil platforms out in the Gulf they were lit up at night, actually very pretty. These pictures were taken from the deck of our rental home. Such beautiful colors at sunrise.

Here's a picture directly in front of the house of the sunset.

It was a perfect getaway and I can't wait to go back next year. Hopefully a couple of weeks earlier when the weather is just a tad warmer.
Thanks for visiting my blog - enjoy the upcoming holiday season and give all your kids big hugs just because. Whether they want them or not.

Giggles rule!
As my lovely sister says 'all is right in the world when your stitching' and that just about sums it up! 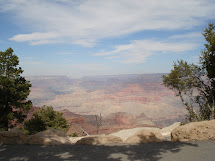